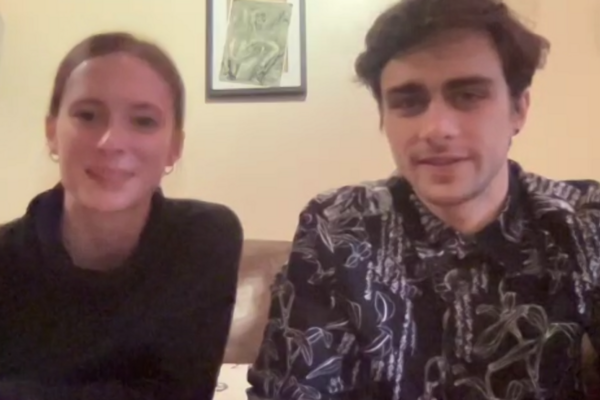 The interviewer for the evening was Lyndsey Winship, the dance critic for the Guardian, who started by asking the dancers about their background. Francesco’s parents were both ballet dancers and he started ballet training with them when he was 3 years old. He said there was no special treatment, and he was “treated as a student rather than a son in the studio!” His ballet schooling subsequently took him across the world from Germany to Mexico. Emma had a rather different start to her career. Her father was a swimming coach so, from a young age, Emma swam competitively. This meant alongside ballet practice she would have swimming training up to two times a day. However, Emma said it soon "became clear ballet was what I loved” and so, aged 11, she made the decision to go to the National Ballet School of Canada.

Both dancers started their careers at the National Ballet of Canada and Emma picked out dancing Swan Lake as a particular highlight of her time here. She had the chance to be coached by Magdalena Popa (“who knows Swan Lake inside out”) and said it was a “very formative experience”. Francesco’s highlight was dancing the title role in Nijinsky, saying it is a “beautiful but very demanding piece”.

Emma and Francesco joined ENB in 2018; Emma as first soloist, and Francesco as principal (alongside his role as principal at the NBofC). Earlier this year, Emma was promoted to principal, and Francesco to lead principal (at which point he left the NBofC). Asked why they chose ENB, Emma recalled “I Grew up loving Tamara and Alina and watched them so much that it felt like a ‘pinch me’ moment to see them for real!” Both dancers praised Tamara Rojo’s work at the company and said being part of her new production of Raymonda was “very exciting.” The dancers also talked about working with William Forsythe, and Francesco said that, despite the exacting quality of his choreography, “it was fun” but “every step requires 100%.”

Both Emma and Francesco performed in the Dance for Ukraine Gala last month and said the experience was “very touching.” Lyndsey noted that ballet is often considered rather fantastical and removed from real world, but the gala was a great example of ballet having a positive real-world impact.

Among other topics discussed in the interview were competitions (Francesco competed at Prix de Lausanne), overcoming pre-show nerves, making dance more inclusive (“we want as many new voices on stage and in the studio as possible”), company culture, and Francesco’s tattoos!

A full report is available on the website here. A recording of this event will be made available to members in a few months time.