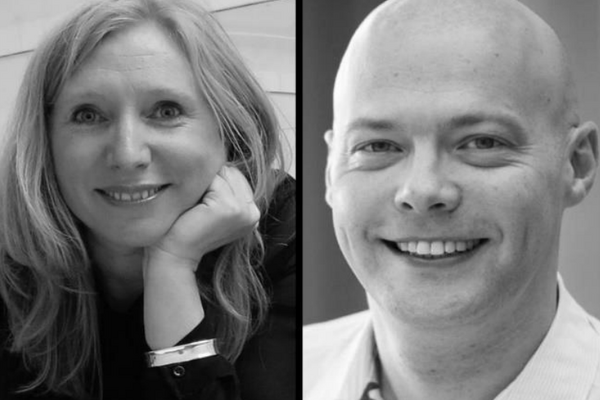 Rob Clarke and Kate Shipway "in conversation" with Deborah Weiss

The Chair welcomed Rob, Kate and Deborah to the first “live” meeting of The London Ballet Circle for what seemed like an age. She also welcomed new members of the Circle. This was a new venue for LBC – the Club for Acts and Actors in Bedford Street, just up from The Strand.

So, how did it all start? Kate told us she came from a musical family; her grandmother had been a pianist and timpanist. From a young age she knew she wanted to be a musician, and went to college, the Birmingham Conservatoire. Having freelanced for several years she played for the RBS Junior Associates Programme. She had never played for ballet before but had seen Philip Gammon, a past Principal Pianist with the Royal Ballet, playing Elite Syncopations and loved it. Kate then got a position with the Royal Ballet School at a time when the Upper School was located in Barons Court and shared premises with the Royal Ballet; she was deeply impressed by the pianists playing for RB rehearsals. She had a job for seven years with Birmingham Royal Ballet, but auditioned in 2005 for the Royal Ballet, and got the job – and has been there ever since.

Rob recounted his early musical life; his father had been head of music at a school and started teaching Rob the piano at the age of five – he hated it! However, from age seven he started going to London once a month for lessons with his father’s old music professor. From age ten he went weekly on Saturdays to London, to the Royal Academy of Music (RAM) and at age 11 had even been featured in a magazine article about young prodigies. He decided at around age 13 he wanted to go to college to study music and was at RAM for four years from age 18. During part of that time he had also been a pianist at a ballet school using the syllabus of the Royal Academy of Dance (RAD). Needing a job in London, he auditioned at RAD and was given a 15+ hours a week appointment. He left college in 1997 and freelanced for a while but then in 2000 he applied to RB, auditioned and was appointed. He spent ten years as a pianist and then in 2010 was appointed Head of Music staff, later expanded to Head of Music, working closely with Barry Wordsworth and Koen Kessels.

Deborah then asked each of them whether they liked watching ballet. Kate said she’d never followed ballet but now, having worked in the art form, she has her likes and dislikes. But seeing dancers in rehearsal, sometimes at their most vulnerable, she likes to follow them through to actual performances. Deborah asked Kate what it was like playing in rehearsals; she said that initially she was terrified playing for some of the “big names” of the day, but now she sees dancers through their career progressions and is more comfortable with the role. But part of the job is to play for Class, as well as rehearsals and occasionally plays as a soloist pianist in the orchestra. Rob interjected that there’s no music in Class – it’s all improv., and Kate described how she was once asked by a Class teacher to play Waltzing Matilda – which isn’t a waltz! Rob then demonstrated that at the piano – and went on to show how it could be played as a waltz…

Both said they feel out of their comfort zone improvising, but they are keen to cheer up the dancers who may have had a very full day the day before and maybe feeling tired and down in morning Class. Kate then told the story of how she was asked by a teacher she’d not met before to play Take Five (Brubeck) or similar, (in fact Kate chose a 5/4 piece for The Sleeping Beauty), wanting a five count. But it turned out that it was in fact the count the teacher wanted, with six being silent – and that’s where improvising had to come in…

Rob talked about how ballet had grown on him; the first ballet he’d seen was in 1999. He was working for the ROH Education Department at the time but was asked to go China where RB was on tour and saw R&J in Beijing. He has developed an appreciation of the work the dancers do.

Deborah asked if they had ever played for dancers who are not musical or appeared not to be. “Oh yes…” said Rob, to laughter. It’s all about how the listener hears the music, which may be different. Deborah went on to ask how nervous they both get when having to play at “concert level” – for example in the Ashton triple bill coming up. Rob response was that it is critically important to be conscious of the dancers, who don’t have the music in front of them, of course, whereas the pianist does. He said that he never plays from memory but always from the music. It has to be what the dancer expects and a mistake can be fatal. Kate went on to talk about Month in the Country – such beautiful music and a real privilege to play it. But both agreed that Chopin is demanding or complex…!

Both were then asked how much they practice. Rob said “a lot” and went on to describe the process over about six weeks leading to the First Night. Kate observed that they are lucky with a run; a concert pianist may often have just one rehearsal before a concert. Rob went on to say that he has a real problem finding time to practice; Kate agreed.

Deborah asked if either had ever “frozen”. Kate described an occasion when something went wrong for her over two bars of music – it felt like an eternity… Rob agreed that if it goes wrong it seems to last forever, but when listening to playback it seems hardly noticeable.

Deborah: What about tempi? What do you do if a dancer asks for a change of tempo? Rob replied that this was a problem for the conductor if present. Rob would want to know why a change was needed. Kate said this could happen if the dancer is debuting a role, or if the dancer has an injury.

Deborah went to ask Rob about playing in The Concert. Space does not permit inclusion of the story of how he came to play (and act) in the ballet, but a version of the story can be found on the ROH YouTube Channel from earlier this year – Insight: Behind the Scenes with the Music Staff of the Royal Ballet (go to 1hr11m for those with internet access).

Kate was asked about playing in New York – “How scary was that?” She replied that she was at BRB at the time, and played the Brahms waltzes. I can say “I’ve played on stage at the Met…!” She regrets and had agreed with Kevin O’Hare about not keeping diaries of places she’s been to and people she’s met.

Deborah asked Rob about Elite Syncopations. Apart from the hat, (too tight!), he thoroughly enjoys it though he was nervous initially as he had not conducted before. He hopes that it will come back again soon, as well as some of the triple bill ballets in the rep.

Finally, both were asked if there is anything ballet they would love to perform. Kate replied Marguerite & Armand. Rob, while he loves that ballet, after some thought he said that he couldn’t think of anything that sprang to mind. But he would look forward to Mayerling as a new experience.

The Conversation was then opened up to the floor and the first question was the thorny subject of digital versus a score with a page turner. Rob said he had mixed views about this; “what happens” he said “if the tech goes wrong?” He said that currently only one page of a score can be shown on I-Pad, but if it was possible to have two pages at a time he would reconsider. Kate agreed. But he did say that open air performances with a score can be a problem if there is a bit of wind! The next question was the vexed problem of getting children to practice. While Rob resisted practicing, he did enjoy playing. He doesn’t think one simply can force it. Kate loves teaching youngsters, but can spot instances where it’s clear the children are being made “to live the parents’ dream”.

To acclamation the Chair then gave a vote of thanks and presents to all three.