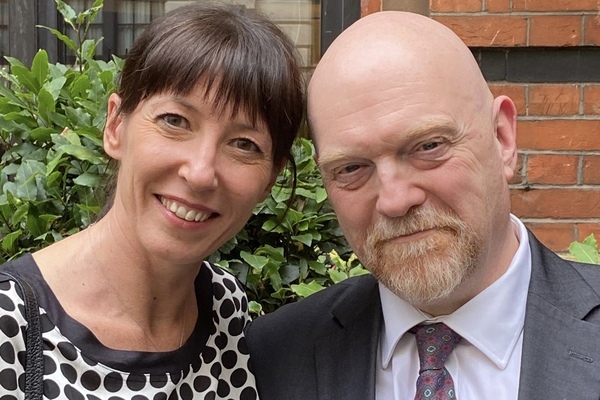 Susan Dalgetty Ezra welcomed everyone to the first post-pandemic in person meeting back at the Civil Service Club.

Graham began by asking Mara how she first got started with ballet, coming as she did from Chiari in northern Italy, with the family soon moving to Coccaglio, a small town close to Brescia.

As a youngster, she replied, she was involved in many sports, including playing football with her brother, horse riding and swimming but also dance because all local mothers would send their daughters to do ballet classes and so, at the age of ten, she went to audition at the La Scala Ballet Academy in Milan. “The first exam I passed, the second exam I passed and the third exam was a month’s trial, I passed.”  The month-long process involved a physical examination as well as daily classes “where they really watch you.” There must have been a hundred children but she was one of only 11 who got through and this was then whittled down to just five.

Once in the school, life was really hard, she admitted, not so much because of the dance but she suffered bullying from other girls and had a lot of insecurities. She frequently told her mother she wanted to leave. “I would pack my suitcase and say to my mum ‘come and pick me up’ but my mum would always say ‘one more day, one more day’ and so she persevered.

For the first three years the young dancers were given grade assessments every three months and, she said, hers were “quite appalling. But I always had that adrenalin to push, to do better.” Then from Year Four they were awarded points and the threshold for staying in the school was a minimum of 19. Mara worked with a personal trainer during the summer months of that year and scored 21. In the final year the maximum attainable point score was 30 and only one dancer had ever previously managed this. In Mara’s final year two dancers achieved that, she was one of them.

Before the end of that year, however, she had, unbeknown to others in the school, paid a visit to London for an audition at the Royal Ballet. “It was a Saturday morning and I did a class with the company and there was Anthony Dowell, Monica Mason and Betty Anderson,” she recalled. On the strength of her ability Dowell offered her a contract there and then but she expressed the wish to complete her final year at La Scala Academy and the Royal agreed to contact her again some two months later.

The call came through as promised offering her a contract. Graham commented: “Then, it was highly unusual for a dancer from Italy and two dancers from Spain to be offered a contract because you hadn’t gone to the Royal Ballet School.”

Mara agreed: “it was highly unusual but because when Irek (Mukhamedov) joined Anthony began to think ‘why not have more people from outside to add more flavour to the company?”’ It was 1992, she was 18 years old, and spoke no English. “La Scala was not particularly happy about it,” she said.

Graham asked: “But that didn’t last for ever?” But Mara replied: “Yes it did.”

Nevertheless, she went from strength to strength. Early in her Royal Ballet career she danced a piece by a young choreographer, one Christopher Wheeldon, at Hammersmith’s Riverside Studios. Watching from the audience were Kenneth MacMillan and Donald MacLeary. MacLeary was to tell her many years later that MacMillan had said to him at the time “That’s one of my girls.”

Sadly, even though she went on to describe herself as a MacMillan dancer she was not to be taught by him directly because it was only a few weeks later that he died. “I got to know him through his ballet,” she said. She did go on however to work with a range of other choreographers including Ashley Page, Alistair Marriott and Glen Tetley. She commented that Page’s work was very difficult but he was so much fun to work with “because he had a lot of respect for us.”

She added: “I was always curious to learn something new, and I still am.”

However, her burgeoning career was nearly de-railed by health issues. During a visit to A&E complaining of swollen feet she was diagnosed with kidney failure and a doctor predicted that the condition was so serious that she could only expect to dance for two more years and would never have children.

She went on to confound the experts with a 20-year career at the Royal Ballet where she became a principal in 2003, and a daughter, Maia, now ten years old.

“There was a doctor who saved my career and my life and I’m still in touch with her after so many years.,” she said. At the time she was hospitalised she was told that a biopsy needed to be carried out and that this would be scheduled for two weeks’ time.

“But’, I said, ‘I’ve got Giselle in three weeks’ time, so that can’t happen. I need the biopsy tomorrow.” The doctor agreed, the biopsy was done the next day, and Mara duly took to the stage and debuted in Giselle.

Graham said: “In your book Shadow Aspect you say ‘I’m not a pretty dancer:

Graham recalled some of her most notable ‘non-princess’ roles such as The Chosen One, Firebird, Tatiana and Mary Vetsera in Mayerling. This latter was her first major role at the age of 19 and it was the role she played in her final appearance for the company on the Opera House stage in 2013 before completing her career with the Royal on tour in Manon.

“Most choreographers saw me as very sensual,” she said. She therefore attracted more characterful roles to dance. “This made me feel more confident in those roles ... It’s about the aura you have and project to the audience.”

Mary Vetsera was her first major role but she went on to dance in other MacMillan creations, including Mr Brother, My Sisters and Judas Tree. “These were psychological roles, everything about Kenneth is,” she said. “It’s about ‘what do I create to make people really believe who I am, who I’m playing?’ I really want people to believe that I’m her. I teach young dancers that.”

Before going on to discuss her new venture as a stage actor, Graham said that after departing the Royal she had returned briefly to appear in the starring role in the revival of Wayne McGregor’s Woolf Works, she had also since danced for Ballet Cymru (her book Shadow Aspect takes its title from a piece by Tim Podesta that she danced for that company) and was now working with the Fabula Collective and will be appearing for them at Sadlers Wells on September 17. She will be dancing in a contemporary piece choreographed by James Pett in one of seven short pieces in a production entitled Momentum.

Mara is booked to carry on working with the Collective till 2024 on other projects “that I can’t talk about.”

Graham turned the conversation to Mara’s love of Africa. She lives with her husband, Jurgen (whom she met as a stage technician at the Royal Opera House) in Muscat, Oman, and founded in 2007 a charity, Dancing for the Children. “I also said when I was young that I wanted to be a nurse in Africa,” she said. The charity, which will be closing soon, has raised money for and brought dance to youngsters in South Africa and Kenya affected by HIV/AIDS.

Talk then turned to the new phase in her career; acting in the theatre. “I always loved acting on stage even if I was just dancing,” she explained. “During the lockdown … I had to re-invent myself.” So she started doing acting lessons online with an actress based in Rome. “I think without the acting lessons I would have gone totally insane.”

She then announced that her first theatrical acting role would be in a few days’ time in her home town in Italy. She would be performing two monologues originally written for a well-known Italian actress Mariangela Melato and also a dialogue with another actor which has been specially written for her. She hopes it will be possible to bring it, in English, to London.

“I think everyone should do an acting course,” she said. “Within two years the confidence I gained from doing those lessons is incredible.”

Winding up, she praised the Royal Ballet for caring for her as a young dancer. La Scala would have thrown her straight into major roles including in Nureyev’s Nutcracker and this she felt would have been too soon for her.

“For me the Royal was perfect because they really nurtured me. They looked after me incredibly well. It took me longer than some other people to get to Principal but I don’t regret any of it.”