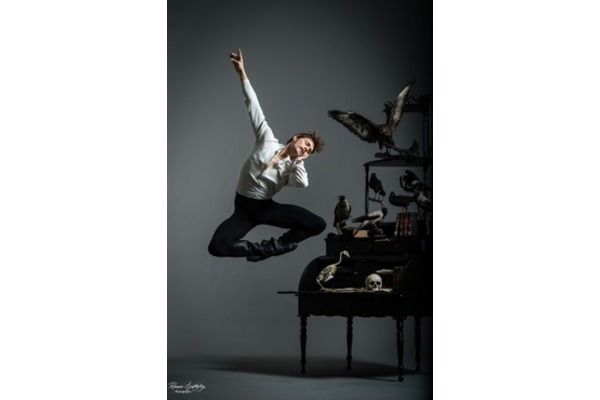 Susan Dalgetty Ezra welcomed the Zoom audience, almost one hundred strong, to the first In Conversation interview of the New Year adding  “… and I’m sure you’ll agree that we are starting 2022 with a really terrific guest ”.  Many LBC members have had great pleasure in seeing Friedemann dance in person and, she said, those who had yet to do so were missing an absolute treat.

Opening the interview Gerald Dowler asked how important it has been for Friedemann to dance with the company of the city where he was born, Stuttgart?

He replied that it had always been his dream to dance for the company not just simply because he had been born there. “It was because the company was, and is, so great. For me there was no question where to go.”

He had from the age of five or six been aware of the city’s ballet status because his older brother, Roland, had danced with the company and he had always watched from the audience and so wished to become a dancer himself.

First he joined the John Cranko School and studied for a few years there before switching to the Académie de Dance Classique Princesse Grace in Monte Carlo.

He explained that during his time at the Cranko School, he also had to attend what he termed ‘normal’ school in the mornings, because German ballet schools did not include a full academic programme alongside the ballet instruction.

Gerald wondered who had been a source of inspiration to the young Friedemann?

“There was,” he said, “an amazing teacher, Marika Besobrasova who had worked closely with Nureyev. She inspired me so much. She was more than a teacher, she was a mentor,” and had made it possible for him to complete his training in Monte Carlo. He added: “This woman prepared me for all my career. She sent me to many competitions by myself. It was a great preparation. I learned to be independent.”

The first competition he attended was the Prix de Lausanne where he won a prize (1997). And although he admitted to not care much for competitions in general, he appreciated that they had helped him grow as a dancer performing on stage before a live audience.  The Prix was in fact his first such stage experience.

“And now”, said Gerald, “you are going to be on the jury for the 2022 Prix de Lausanne, so you have come full circle.”

Friedemann agreed and said this was a great opportunity to meet other jury members and see new dancing talent from another perspective “and by analysing what you see you learn so much yourself.”

He said: “I want to see movement, I want to see passion and it’s not about how much you turn and your technique, it’s more about what you tell with your body. “It is important to see the talent and the value of an artist more than to have a machine that works well.” He hoped there was not too much focus on pure technique as, “especially now, we’re so hungry for feelings, for emotions, for rhythm”.

Friedemann joined the Stuttgart Ballet in 1998 when Reid Anderson was artistic director and while his brother was in the company.  Anderson had watched Friedemann in class while he was still training at Monte Carlo and on the strength of what he saw offered him a contract.

Anderson pushed young dancers from early on and Friedemann was to dance many main roles during his first season starting with Ballanchine’s Theme and Variations.  He had originally been in the fifth cast, but injuries to other dancers meant he was soon on stage.

“I was fearless,” he said. “If I had to do it now in one week I would freak out. But when you’re young, you’re so green, you just do it.”

Asked by Gerald if he preferred classical roles, he said he needed variety to be a happy dancer and, for example, at present Stuttgart was working on a new creation by Johan Inger while also rehearsing Mayerling. Did this, Gerald wondered, create any conflict?

Friedemann said the older he became, the more he could trust his body to cope with such demands. He had earlier in his career sustained injury that had kept him off for more than a year, and during that period he came to understand that nothing could fulfil him as much as dance.

Cranko remains an important part of the British ballet family, said Gerald, what did Friedemann get from those roles?

“I grew up watching them,” he said. “There’s something almost holy when you dance them for the first time.” One such was Onegin in which he had danced the role of Lensky a number of years then Anderson said “now you’ll do Onegin. It was almost unbelievable.”

He described the ballet as a masterpiece. “Everything is just at the right time and with the right feelings. It touches people with the same feelings now as 50 years ago.”

Friedemann enjoys abstract works but finds a story ballet more fulfilling. A live performance is also always a one-time-only experience which is why, if asked was it not boring to dance the same role 50 times, he would say that every time was a different journey.

Gerald asked about partnering. Friedemann commented: “Once you feel it’s a unit, I love to dance with the partner who can share that with me. The chemistry has to be there and that can happen even after just a few rehearsals.”

The conversation turned to the subject of Mayerling that had been acquired by Stuttgart Ballet a couple of years ago and a new production had been created with designs by Jürgen Rose. Friedemann had danced Prince Rudolf on the opening night. How, asked Gerald, had he prepared for the role?

“It was a very long process for which I was very happy,” Friedemann explained. “I only had Mayerling at the time and I was completely focussed.” The company rehearsed in another building where there were no mirrors in the studio. That was a new experience. “It made me feel it even more, not how it looked like.”

It was hard, he said, to switch off once the rehearsal finished at 7 o’clock. “If you spend hours physically portraying Rudolf, it stays in you.”

Friedemann had extensively researched the historical figure he was portraying and Rose had also been researching the story for two years and had some historic documentation including letters that had only been unearthed ten years previously. This all helped with the characterisation. The production also featured all new sets and costumes.

Gerald asked if Friedemann’s view of Rudolf changed now that he had danced the role?

“It’s definitely getting clearer,” he said, adding; “It’s such a marathon of a ballet.; so many partners coming in and in and in, problems getting bigger and bigger. You can’t guide the story, you have to let it happen to you and react to it.”

Asked how long it took to recover from the role Friedemann said: “After the first time I remember I collapsed. There was nothing left in me. The next morning you feel like you’ve had a dance with a train!”

Turning to his career as a world ballet star guesting around the globe, Friedemann recalled that his first such appearance had been as Romeo at the ENB. Reid Anderson had generously let him go to dance ballets that were not in Stuttgart’s repertoire and in this way, he got to dance in Manon, in Macmillan’s Romeo & Juliet, and Raymonda. He was especially fond of guesting in Russia where “there are so many great, incredible teachers and coaches who have a lot of knowledge about classical ballet. You learn different styles, a different culture of ballet which makes you grow as an artist. “

Among the guesting roles had also been Oberon in Ashton’s The Dream at the Sarasota Ballet where he had been coached in the role by Sir Anthony Dowell: “an amazing experience. Oberon is a very challenging process. I was afraid to meet Anthony, because I admire him so much, but he was the same as he is as a dancer you see on stage; so generous, so inspiring.”

He admitted that he was interested in coaching in the future and taking on a role of artistic director. He had also started choreography although that was in a specific context. His short work Not In My Hands had been conceived during lockdown and at a time shortly after his mother had passed away. “There was a real desire for me to dance it out,” he said. “I couldn’t say it was choreography. It was my feelings moved into steps.

“I did feel better, but I never did it in front of a live audience, it was an empty theatre, (no) thanks to Covid.”

The whole experience of lockdown was difficult because of the lack of body contact. “To work physically together all the time and suddenly you’re not allowed to work in the same studio. It was something so strange not to touch anyone,” he said. “I remember the first time when we started to touch each other again, it was like ‘are we allowed?’”

Wrapping up the conversation Susan Dalgetty Ezra commented: “It’s always fascinating to meet the person behind the dancer.  Thank you, Friedemann, for sharing that with us and we cannot wait to have you back in London.”