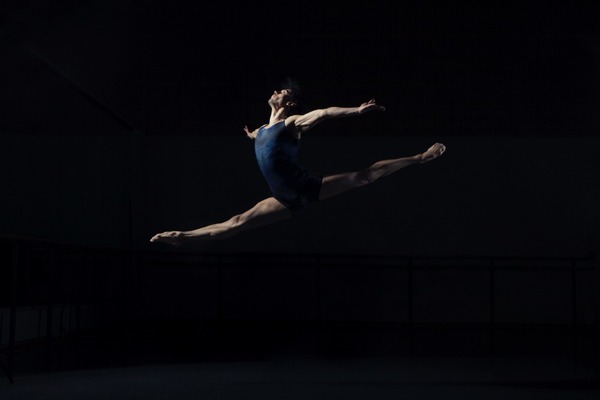 Preceding the talk, Susan Dalgetty Ezra, chairwoman of the LBC, led a moment of quiet reflection to think about “people in Ukraine who have lost their homes, their lives, their livelihoods.” She then welcomed everyone to the event, including a number of new members, as well as members of the Anglo-Chilean Society.

The interview started with Graham asking about Cesar’s recent injury. Cesar has shared pictures on social media of his rehab and replied: “This actually started quite a while ago. I started feeling a bit of pain around my hip area, but I tried to keep going as long as possible.” It was left to Cesar’s physio to tell him to stop performing. Cesar commented that there was no way he wanted to perform at only 50% of his normal standard: “So for my career, and for my body was better to decide to stop for the moment.”

Whilst Cesar had stopped performing, he didn’t stop doing classes: “I was still working every day.” He commented: “I'm working out a lot with the specialists, so I get stronger, so it doesn't happen again. But sometimes these things take a bit longer than we expect.” Although Cesar is recovering well and getting back into good shape, he said that he won’t be appearing in BRB’s production of Don Quixote since “there is nowhere to hide” and “I didn't want to do like show that I won't feel happy with because I couldn’t do it at 100%.”

The topic then turned to the pandemic, which has posed a number of challenges for dancers both on a personal and professional level. It has been a hard three years for Cesar, particularly because he hasn’t been able to travel home to see his family in Chile – though he said, “I’m going to try to go in the summer!” Cesar commented that physically, as a dancer, the pandemic also presented a number of challenges, “like, we were doing everything at home, we were doing classes in the kitchen with a chair and everything, but it's not the same. It was very, very difficult to keep going.”

Whilst some companies, like Scottish Ballet were off during the pandemic for a very long period, BRB was able to reopen briefly for a few performances. The company was split into “bubbles” and Cesar described the experience as “strange”, saying “you wouldn't see your colleagues like normally, it was all separate.”

Carlos Acosta became director of BRB at the start of 2020, and then almost immediately the country was plunged into lockdown. Cesar said it was “really hard” for Carlos because he “obviously couldn’t do all his plans.” It was also hard establishing a relationship – this wasn’t the normal situation where “you meet the new director and work with him.” With everything being online Cesar joked that “you assumed he was watching classes, but it wasn’t the same!”

Having asked Cesar about some of the most pressing issues of the day, Graham turned the spotlight onto our guest’s personal life and asked him about his beginnings, growing up in Santiago.

From a very young age, Cesar loved everything about art – “painting, drawing, singing all these things.” The first time he was exposed to ballet was on a school trip to the Opera House in Santiago for a singing competition. “What I saw was incredible. I remember just going back home and trying to repeat what I saw not knowing anything, obviously. I just said to my parents, I want to do that.”

His parents were apprehensive at first, saying to the young Cesar “every week you want to do something different”, but thankfully Cesar’s older sister drove him to the ballet school where there were auditions, “And they took me, they saw I had potential.” On Cesar’s first day at ballet school, instead of the leotards that all the other children wore, he turned up in “blue shorts and a batman t-shirt” and “was terrified because everyone was stretching and doing things. I didn't know anything. But they took me. So that's how I started.”

Cesar excelled in his early study and at the age of 15 left Chile to complete his studies in America. He was spotted by the director of Houston Ballet, Ben Stevenson, and despite not knowing any English (and some well-meaning concern from his parents), Cesar left Santiago and joined the Houston Ballet Academy. In Houston, Cesar took class very seriously, relishing the artistic opportunities and building the foundations of strong technique.

After Houston, Cesar returned to Santiago and at a very young age was promoted to soloist in the National Ballet. At the age of 18, he was promoted to principal. Cesar commented on his rapid rise, saying “I think I was very lucky to be so young and work with so many amazing people. I learned a lot.” Among many fond memories of dancing in Chile, Cesar highlighted the experience of dancing in the beautiful opera house and learning “how to be a partner, and how all these little secrets that you need to know to make a difference.” He said of Santiago: “I have beautiful, beautiful memories.”

Following this, Cesar had spells dancing in New York, followed by Paris, then a smattering of roles across Europe in Czech Republic and Slovenia before coming to London to join the English National Ballet in 2004.

Cesar was at ENB for 4 years, where he rose to prominence among UK critics and audiences alike. Cesar said his time here “was an amazing experience” due to the variety of the repertoire and the sheer volume of shows they put on each year. He singled out dancing Swan Lake at the Royal Albert Hall as a particularly “beautiful experience” – although dancing ‘in the round’ was “so difficult!”

ENB is a touring company, so Cesar was ‘on the road’ a lot. This was a change in pace from the guest roles Cesar had held at other companies in Europe. Cesar said touring was difficult and tiring: “I remember doing Sleeping Beauty and we used to try and get some sleep in the intervals. It was really hard!” Despite this, Cesar was still so happy to be dancing, but wanted a change and to take more time to look after himself.

So, in 2008, Cesar joined BRB after a recommendation from one of his friends. He went to his first class and found everyone was so friendly. In his first meeting with David Bintley, he was asked to join as a principal dancer. On David’s retirement, Carlos – one of this generation’s most famous dancers - took over. Cesar said, “everyone was really excited to work with him” although he was worried “his standards might be so high!” Because of the pandemic, it has been difficult to work with him, but Cesar commented that Carlos has a refreshing, modern take on classic choreography and he has “so much respect for that.” Cesar added that Carlos’ input to BRB has added some ‘star factor’ and increased the quality of dancing – “he has so much experience and we have so much to learn from him.”

In BRB’s recent production of Don Quixote, Cesar was asked to coach the principals – he said this made him “feel so proud.” The opportunity was really exciting and despite not dancing, it was a “chance to feel really involved”. BRB are dancing Carlos’ production, so delegating the responsibility of training the male principals was a huge responsibility and Cesar said the chance to work with Carlos was very interesting. Cesar mused on the possibility of a future in coaching and Graham said he was “sure [Cesar] would lead a fantastic class.” However, the current run of Don Quixote has not been without problems. The opening night was postponed due to a storm, and Covid has wreaked havoc with the casting – Cesar commented that “some principals have had to dance with other partners” and said it had been challenging.

Alongside his company commitments, Cesar has performed a range of roles in Vienna, as a Guest Artist. He said the first-time dancing there was “stressful” as it was Nureyev’s Swan Lake – and it “was so long!” He conceded that “it was an amazing experience.” Travelling around the world and dancing with different companies, Cesar argued, makes you a better dancer and opens your mind to different styles and interpretations.

With members of the Anglo-Chilean Society present, Cesar was asked to talk about his guest appearances in Chile, as well as how the ballet scene has changed in the country since he left. Although ballet still isn’t appreciated in the same way in Chile as it is in Europe, Cesar was pleased to report that it is rising in prominence – “things online mean more people have the chance to see it.” Cesar said: “I love going back – it’s my home.” Cesar also commented on “how amazing it is to work with Marcia Haydée” – the director of Ballet de Santiago. The company has changed a lot since Cesar left; he joked that “all the people there know me, but I don’t know them!” Returning to Chile is also a chance for Cesar to see friends and family – Cesar’s father gets “really emotional” every time he watches him dance, and Cesar said he “gets nervous dancing in front of his old teachers and friends!” Cesar was recently given an award from the Chilean Ambassador, illustrating the great affection in which he is held by the Chilean people. Cesar modestly said, “people do recognise me, but I’m not like a superstar!”

To finish off the interview, Cesar was asked which roles are on his ‘wish list’. Cesar replied that Cranko’s Onegin was a dream role – “It’s a beautiful ballet, with beautiful music.” He also said he loved Balanchine’s Jewels.

In 2020 Cesar was awarded the Critics’ Circle Best Male Dancer Award – validation of the fact Cesar is still at the top of his game. Cesar said of his win: “I was so surprised, I never thought it would happen. I was so happy!” So, given Cesar is still at the pinnacle of the dance world, what does the future hold? He said, “I do love the coaching, as well as dancing” and that he wasn’t scared about the future.

How easy is it for you to switch from story ballets to more contemporary work?

You recently had Marianela and Vadim guesting with BRB. How did this come about and how was it accepted in the company? Did it have any benefits?

“It was amazing to have them here – they are superstars. It was super inspiring for everyone to see them dancing. It is just great to see other dancer’s interpretations. Both of them are such nice people and are so humble. It was really nice to have them in class. They have such a high standard of technique and artistry but are so down to earth.”

What is like for the dancers given that Carlos isn’t always present?

“Company directors have so much other work they have to do, so we understand it is impossible for him to be there all the time. We would love him to be in the studio all the time - he is Carlos Acosta - we all have so much to learn from him!”

Written by Ben Ettridge and edited/approved by Cesar Morales and Graham Watts.