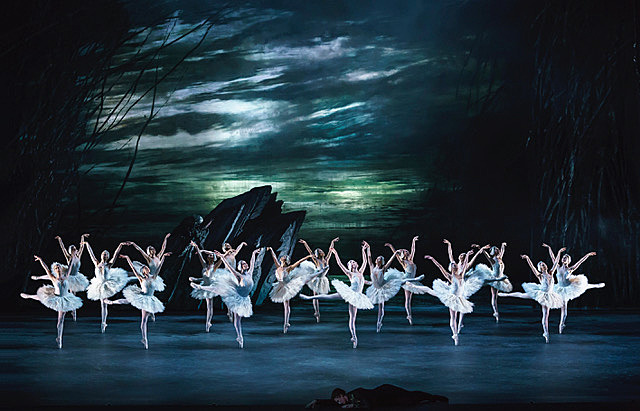 As his book SWAN LAKE: REIMAGINING A CLASSIC is published, Bill talks about his varied dancing and photographic career

Having been introduced by Graham, Bill mentioned that James Illman, “without whom the book would not have come to fruition”, was among the audience.

Bill’s ‘story’ began when he was 15 and attending Westminster City Grammar School. His plan was to take his O-levels, leave school at 16 and progress to Saint Martin’s School of Art. But, then, he saw Rudolf Nureyev performing on TV and was “completely captivated by everything about him”. Bill also saw Coppelia live and, although “it wasn’t anything special”, it served to cement his interest in ballet. Having taken some evening classes, Bill was accepted into the Legat School of Ballet in Kent where he studied full-time for two years. He described his mother’s  reaction to this move as “non-committal”, perhaps because, in that era (the 1960s), a boy’s interest in dance could be regarded with a certain scepticism.

Although Bill was a late-starter, he had no difficulty in gaining employment as various directors came to the school. So, from aged 18 onwards, he had a series of contracts in Portugal, Switzerland, Belgium (with Ballet Royale de Wallonie) and Germany before joining Scottish Ballet in 1977. He reflected on the fact that, while in Europe, he had worked alongside a number of famous dancers, including ballerinas Menia Martinez from Cuba, who was a close friend of Nureyev whilst at the then Kirov in Leningrad,Russia, and also Paolo Bortollusi.

Although Bill had been interested in the arts and often took various photos during his youth, he didn’t begin to do so seriously until his time at Scottish Ballet (1977-81). He had tried his hand at choreography, with some success, and his first photos of dance were taken during a choreographic evening. Peter Darrell, the Director, had been very encouraging and generous in helping Bill to develop his photographic skills alongside his dancing. For example, in his last year with the company, Bill had always been in the second cast in order that he could takes photos of the first cast. Peter had not only given Bill commissions but, along with Robin Anderson, had advised him as to his professional name, how to draw up a contract, and the level of fees he could charge.

[Bill had recently attended the company’s 50th Anniversary celebrations in Glasgow - its abiding community spirit still exemplified by the presence of dancers from Australia who had left in 1980.]

Admitting that it wasn’t easy to set oneself up as a performing arts photographer, Bill explained that he had taken out the £1200 in his German pension fund to help him buy a small flat with space for a darkroom. He had also worked part-time with both English National Opera (including the original Jonathan Miller production of The Mikado) and The Royal Opera, while endeavouring to establish himself. Through the contacts this gave him, including the ROH Press Officer at that time, Katherine Wilkinson, he managed to secure a couple of commissions at The Royal Opera House and also with English National Ballet and the London Contemporary Dance Company. Although he had not encountered them personally at that stage, Bill was very aware of the work of Anthony Crickmay and Leslie Spatt and aspired to succeed as they had done.

Graham’s reminder that the photographic process was very different when Bill was setting himself up to what it is now led Bill to comment that “it was like magic – the way the images would appear”. At the start of his career, he was producing negative contact sheets for company staff to review and it was necessary then to be very skilled at judging the exposure whereas, nowadays, being four stops out could produce satisfactory results. Moreover, in the current era of digitisation, where thousands of shots could be taken, it was difficult for people to imagine the earlier days when Bill would have 20 rolls of film per commission  and only 36 shots before needing re-load.. Bill had also created a camera box (a ‘blimp’) which ensured that no camera noise carried during a performance and this had the effect of making matters even more cumbersome.

Bill agreed with Graham that having been a dancer did help him to judge when to change the film, but he recalled an occasion when, partly because the camera had no counter, he was re-loading at the wrong time and missed an essential male variation. However, even with the luxury of 20 shots per second, it was still, unbelievably, possible to miss “the moment”. As there was a slight delay from when one pressed, photographers needed to be able to anticipate a key movement and dancer/photographers did have some advantage in this respect. Bill felt that his dance background also helped him to ensure that he only selected images where the position was correct and look good: unfortunately, this was not always the case with published photos.

Notwithstanding his large body of work featuring classical ballet, Bill finds the Royal Ballet’s modern works and contemporary dance more interesting to photograph as it doesn’t feel as restricted and there are more positions to capture.

Although the theatre per se did not “grab” him, Bill was very drawn to opera and gradually came to add Glyndebourne and Welsh National Opera to his client list. He had recently been working on Agrippina at the ROH and seeing major stars on stage (he mentioned Dame Janet Baker) was very special for Bill. He added that opera had its own challenges, not least because of the massive sets which covered the stage.

Graham mentioned Johan Persson and Andrej Uspenski, both of whom had danced with The Royal Ballet and were now established photographers. Bill’s main advice to someone setting out today would be to try to diversify in order to make a reasonable living. The fees which a performing arts photographer could attract in 2019 were less than 10 years ago. Instagrammers were everywhere and copyrighting had become more complex. In response to a question later, Bill also suggested that success needed an attitude of mind which was never quite satisfied. He would not only arrive very early for a photoshoot but would stay up late “getting rid of the duds”, feel dissatisfied, and then be up at 5.00-6.00am the next day to review his work afresh. He was always “trying to get that special something else”.

Bill is currently using a SONY A9 and finds it a huge asset to have a camera which is silent. This is especially important for opera rehearsals although, in the case of dance, it is sometimes mistakenly thought that nothing is happening. So much so that, in one Swan Lake session, Liam Scarlett had turned to Bill and asked him when he was going to start.

The idea for Bill’s recently published book, Swan Lake:Reimagining a Classic, had begun when he was asked to produce a poster for the new production. It struck him that this was the beginning of a very significant journey which could, and should, be documented. So he approached Oberon Books (with whom he had worked on publications  about the ROH (entitled In House) and Birmingham Royal Ballet and then put the idea to  Kevin O’Hare, Director of The Royal Ballet. Both he and Liam Scarlett liked the proposal and so it came to pass that Bill was able to photograph Liam outlining his vision to the dancers, John McFarlane personally painting the sets, the iconic tutus being fitted and all five main casts in rehearsal and performance.

Bill had especially wanted to photograph the corps of swans from above and made elaborate arrangements to do so, only to be thwarted, firstly, by his pass not re-admitting him to the stage area after he went to the toilet and, secondly, by the rigging obscuring the view. He did, however, succeed in his aim where the cover photo for his book was concerned. He knew that what he was after wouldn’t work completely from the front and therefore positioned himself successfully at the back of the Grand Tier.

In response to Graham’s enquiry about dancers whom Bill had especially enjoyed photographing, Bill spoke of the very great sense of privilege he felt at being in rehearsals with leading dancers of their time and able to watch the whole process, including the very challenging moments, especially Marianela Nuňez’s journey in Liam’s Swan Lake. He felt very honoured to have had Sylvie Guillem ask for him several times and felt that that indicated a sense of trust which was very important to Bill in his work. Invited to mention dancers whose qualities stood out instantly for him, Bill named Alina Cojocaru, whom he had “spotted immediately”, and William Bracewell, whom he had photographed in Birmingham as well at The Royal Ballet.

Questions from the audience caused Bill to reveal that the biggest ever reproduction of one of his photos was of Adam Cooper as The Swan/Stranger in Matthews Bourne’s Swan Lake on a billboard for the Dominion Theatre, Tottenham Road. He also mentioned that his photos sometimes turned up in strange places – for example, after Sylvie Guillem’s last tour, he went away to a Spanish fishing village, only to find the whole place bedecked with posters of Sylvie. He had also heard that some pictures he had taken of a young Leanne Benjamin had surfaced in Woman’s Own in New Zealand.

Before closing, Graham noted that it had been a particular pleasure for him to meet Bill as they both produced copy for the Japanese Dance magazine. The evening ended with grateful thanks to Bill, a big round of applause and the opportunity to purchase, and have Bill sign, a copy of his book.

Written by Linda Gainsbury and edited/approved by Bill Cooper