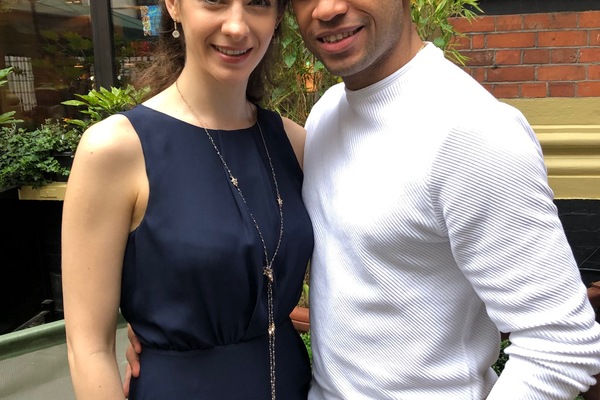 Two former ENB Principals make a flying visit from Munich to update the LBC on their careers.
24 Jun 2019

The LBC was delighted to be able to welcome back to London former English National Ballet (ENB) Principals, Laurretta and Yonah who are now members of the Bayerisches Staatsballett in Munich.

Host Linda Gainsbury quickly reminded the audience of their very different training, one in the UK, the other in Cuba, the fame they achieved with ENB and their considerable success in competitions. “So, why Munich?”, she enquired. The answer was that any dancing career is relatively short and, although they appreciated the new work being introduced by ENB each year, they were attracted by the prospect of widening their repertoire still further, including enticing ballets (such as those by Ashton and Wheeldon) which had originally been made in London and they had seen performed here.

Although the medium of communication was English, there were interesting differences in the ways in which the Bayerisches Staatsballett worked. For example, Principal dancers were assigned a particular coach who worked intensively with them as individuals on all their roles, sometimes for 3 hours at a stretch, the performance schedule was more concentrated, and the way the Company acquired various performing rights meant that ballets tended to be in the active repertoire for 3 to 5 years at a time. Both Laurretta and Yonah liked this approach as it gave them the opportunity to revisit roles within a relatively short time frame.

As she had already done with ENB (as Myrtha and Giselle and in Le Corsaire), Laurretta was making something of a specialism of dancing both leading female roles in one ballet (Olga and Tatiana in Onegin; Phrygia and Aegina in Spartacus; Kitty and Anna in Anna Karenina) and she talked in some detail about how she prepared herself mentally as well as technically for the many challenges this presented. Yonah had found himself dancing Petruchio within 5 days of arriving in Munich in Cranko’s Taming of the Shrew and, more generally, was enjoying the stylistic range he was now adapting to “from Colas to Spartacus”. He, too, spoke about the emotional preparation which was needed to interpret roles such as Le Jeune Homme “from the inside”. While the technical aspects remained important to Laurretta and Yonah, as their artistic careers progressed they were attaching ever greater significance to “really living the character”: They both wanted the audience to be able to travel on the journey with them and experience far more than just the steps.

Being able to dance together in Munich meant a lot to Laurretta and Yonah as it brought a further dimension to their interpretations – especially as the fighting couple, Kate and Petruchio in Taming of the Shrew (for which they had garnered rave reviews). [Report continues after photo]

Even so, there were aspects of dancing with ENB which they missed, especially the Christmas/New Year Season at the Coliseum, which seemed to generate a very special atmosphere. Laurretta added that the London audiences were really appreciative and they were frequently asked when they would be coming back.

But they are very much international artists now, guesting in both full length ballets and, together, in Galas. Laurretta had spent a month with AcostaDanza in Havana preparing to perform Carlos Acosta’s Carmen there while, having recently danced Colas in Munich, Yonah was then invited to guest in La Fille Mal Gardée in Stuttgart. Yonah had also had leave of absence to make a film in Cuba and, in August, Laurretta was due to begin shooting in the name role for the life story of Olga Spessivtseva, a contemporary of Anna Pavlova.

They were also busy preparing for Dancing for a Dream, a Gala evening on 10th November at the New Victoria Theatre, Woking. This had come about mainly because of the need to raise money to enable Laurretta’s nephew, Dexter, who has cerebral palsy and multiple other health issues, to access the medical help he needs in the USA. But it was also partly in response to people enquiring when they were going to appear in the UK again. [Leaflets with information about how to book for the evening with other world ballet stars also on the bill were available for the LBC audience to take away.]

(Much) further into the future, Laurretta would like to be in a  position to put something back into the ballet world, perhaps in a leadership role where she would be able to focus on nurturing dancers.

For the moment, the LBC wished both Laurretta and Yonah well with their high profile careers and success for their November Gala where everyone who could get to Woking would be thrilled to see them dance. Members and guests of the LBC lingered to talk with Laurretta and Yonah long after the formal proceedings. There was a buzz of enthusiasm about the evening and everyone was making comments like these:

"A couple that is massively talented as well as very likeable and adventurous!!!  I wish them great success and joy in their lives.  A thoroughly enjoyable evening."

“It was lovely to see a dancing couple in such harmony and to hear comments from them about their work which really came from the heart”.

“What a fantastic, interesting evening. It was so nice to see Laurretta and Yonah again and I’m looking forward to watching them on stage in Woking.”