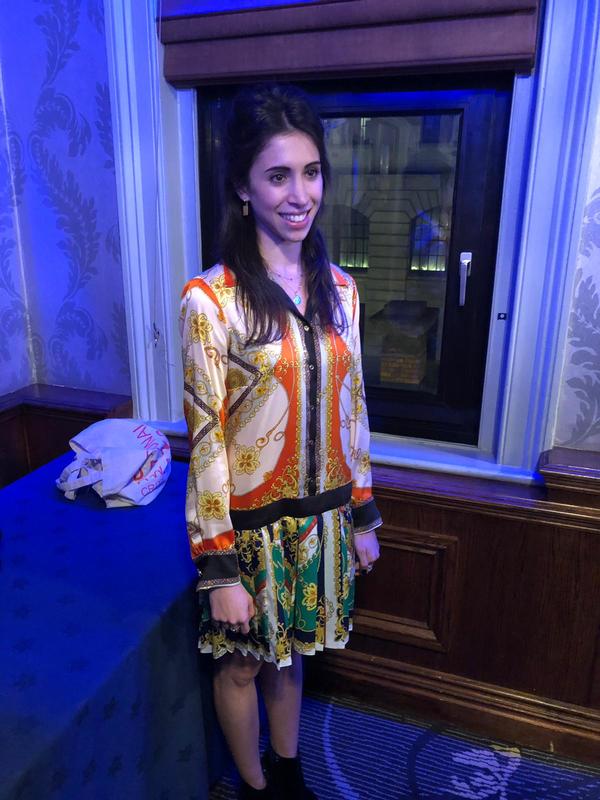 The LBC talks with Yasmine Naghdi as she draws breath after Kitri and looks forward to a busy summer.
15 Apr 2019

Yasmine spent an evening with the LBC at a point when she had a little respite in her performance schedule after an incredibly busy patch in which she had not only starred as Kitri in The Royal Ballet’s Don Quixote but had also performed Sleeping Beauty with San Francisco Ballet as Aurora. Both these appearances were widely acclaimed, as was her Don Quixote pas de deux in the recent Russian Ballet Icons Gala.

Since becoming a Principal of The Royal Ballet, Yasmine had given a number of interviews exploring her training and the earlier stages of her career and she had kindly agreed on a more ‘thematic’ approach to the conversation with the LBC.

With guesting as the starting point, Yasmine first talked about her invitation to guest with San Francisco Ballet. She explained that, whereas the skeleton of ballets such as The Sleeping Beauty tended to remain the same, the production details quite often varied in unexpected ways. Yasmine had requested a DVD of San Francisco Ballet’s Sleeping Beauty and she studied the ballet in between her rehearsals for Kitri and The Firebird, and during evenings at home; she had even used her fridge as her Prince when practising.

Being in a different studio with different teachers, surrounded by different dancers does feel strange but everyone was very welcoming and there is an innate high respect for Royal Ballet dancers. The company schedule at San Francisco Ballet is very different as it involves two months of intensive rehearsals followed by three months of performances, whereas The Royal Ballet tends to rehearse and perform simultaneously.

Responding to being read quotes from enthusiastic reviews of her Aurora, including references to standing ovations, Yasmine said that experiencing that kind of audience appreciation gave her an “overwhelming feeling” and made all her hard work worthwhile.

International appearances were not without additional challenges, such as when she performed Romeo & Juliet in Bahrain with Alexander Campbell. They had needed to substitute the kiss in the Balcony scene by a long hug.

Nevertheless, dancing with other companies, working in different environments, and performing for ‘new’ audiences were for Yasmine a very welcome and highly stimulating experience. Having guesting opportunities also made her value what she has in London all the more, in particular the repertoire which “completely fed her soul”, the exceptional standard of healthcare which had developed during her ten years with The Royal Ballet and, not least, the warmth from the regular audience.

Yasmine’s recent repertoire with The Royal Ballet raised the question as to how she coped with the differing demands of classical, neo-classical and more modern work at the same time. Recalling a period when her performances of Swan Lake coincided with rehearsals for a new modern work by Hofesh Schechter, she explained that it is important to devote time to refreshing one’s body and re-framing one’s mind. There were times when Yasmine would take one ice bath before a show in order to recover from her afternoon rehearsals, and another ice bath after a show in order to speed up her recovery. Another important aspect was using the gym intelligently when preparing for jumping, improving core stability and building the necessary endurance for roles such as The Firebird. In other instances, it was not so much the physical as the mental preparation which needed to be more intense.

Over the past year, Yasmine had danced with most of the male principals and some male soloists and she was very appreciative of them all. The support and encouragement she had received from her principal partners Nehemiah Kish and Federico Bonelli when she made her debut as Odette/Odile in Covent Garden, and on tour in Madrid, had been nothing short of amazing. It was, however, important for ballerinas to also be sensitive to their partners, even going so far as to adapt their dramatic interpretations. Yasmine recalled starting rehearsals for The Two Pigeons with William Bracewell but, because of his injury, eventually danced her shows firstly with Alexander Campbell and then with James Hay. She felt that she had been a “different girl” in each of these two performances because of the nuances in the interaction varied so much with each partner.

For Yasmine, the concept of chemistry between two dancers is an elusive one as it is, she thought, also very dependent on individual perceptions within the audience. She was conscious that, in a narrative ballet, what she did with a role and how she related to her partner was a bit like a poem: in such case it is the deeper meaning behind the words which is significant; with ballet it is a case of conveying one’s deeper feelings behind the movement and moving your audience to experience that too. Music is Yasmine’s key source of inspiration as it amplifies her individual emotions: if the sound is grieving she is grieving inside too. After so much preparation, when she is finally on stage, Yasmine just lets her soul take over, sometimes to such an extent that it feels as if she is in a trance.

In terms of shaping her career, Yasmine’s view was that it was her own responsibility as a dancer to demonstrate that she was healthy, strong, always mentally prepared, willing to put in all the preparative work and to go the extra length, and always aspiring to give the very best of herself. Where choreographers were concerned, dancers needed to be a blank canvas but also ready to offer personal perspectives. Yasmine does not herself ask for roles as she respects and trusts her Director Mr Kevin O’Hare’s view of how she should be cast at any given point as her career develops. However, she does venture into suggesting what she would like to dance at some point in her career. Through the misfortune of others she had also been able to prove, on numerous occasions, her capabilities by stepping in at the eleventh hour and there were many occasions during the past ten years when she took over a role at the “last-minute” with very little preparation time.

Most of those opportunities arose before Yasmine was promoted to Principal and Linda wondered whether there was an even greater sense of expectation now that she was ‘at the top of the tree’. For Yasmine it is mainly about the pressure she puts on herself and, over the years, she had had to find a way of being less harsh on herself whilst still striving for what is “unattainable perfection”. As a soloist, she would get annoyed with herself over every small mistake, including the ones over which she had no control! She felt her self-criticism was much more measured now, even though the high sense of responsibility, which goes hand in hand with being a Principal, will never go away. The feeling of mutual respect and support amongst the Principals, and from within the company as a whole, was very real and something Yasmine really valued.

Ask about her training and career trajectory – The Royal Ballet School White Lodge and Upper School, and the Company – on how to prepare for inhabiting highly dramatic roles, Yasmine thought that it would be beneficial for ballet schools to include acting classes on the curriculum. She herself had watched a lot of B/W 50’s Hollywood movies, Hitchcock and Art House movies as well as dancers from previous generations and this had aided her to become a character from the inside rather than just acting. It is sometimes very hard to rehearse the drama as the studio environment is so unlike that of the stage. Furthermore, as more than one show is really needed in order to find “the right emotion”, Yasmine is especially looking forward to revisiting Giselle and to deepening her interpretation.

Yasmine works with a number of coaches and she was eagerly anticipating working with Dame Monica Mason on The Firebird, but each coach gives her a different layer and a different perspective on which she builds. They also help to maintain spontaneity in her performances and she hoped that her mind-set wouldn’t change during the live-relay of Romeo and Juliet on the 11th June. It is important to Yasmine to always remember and hold onto the fact that ballet allows people to escape from a sometimes hard or painful reality and her focus would remain firmly on her immediate audience at the Royal Opera House so as not to be daunted by the thought of the live cinema screening for a worldwide audience.

Increasingly, Yasmine has been creating roles and, for The Unknown Soldier, had inherited that of Florence Billington part way through. She had found the process “wonderful” and was grateful to have had an input. The other bonus was that she and Matthew Ball had had four performances in place of the scheduled two, including the honour of dancing the opening night, which “felt very special”. Yasmine herself does not read any reviews, although her friends are generous enough to tell her when she gets good ones. She feels her performances are uniquely hers, she has her own responsibilities: to dance at the highest possible level, to artistically interpret roles the way she feels them as an artist, and also to get personal pleasure out of her performance. How the critics perceive and subsequently write about her performance is their job.

Pointing out that, no matter whether the role was a created one, a debut, or something more familiar, all shows ended with curtain calls, Linda wondered what Yasmine’s mind set was at that juncture and whether what had just happened to her character made a difference when she took her bows. Yasmine said she sometimes stood there feeling as if she was still in the story and she needed time to come around. It is, she admitted, sometimes difficult to absorb the applause and be cheerful immediately after a tragic ending. Adding that she really appreciated people waiting to meet her at the Stage Door, Yasmine also confessed that there were times when she didn’t come down to earth and become herself again until she was home. Joining commuters on the underground straight after a performance often feels unreal.

Asked from the audience whether she found it exhausting playing emotional roles such as Juliet, Yasmine agreed that her emotional involvement is so intense that she feels mentally drained by the end of a ballet; but then she also had the chance to dance something like Elite Syncopations which had the effect of “almost giving dancers energy” and enabled her to dip into the lighter, more comical, side of her personality.

Referring to the support Yasmine felt from other members of the company, another questioner wondered whether there was verbal interaction, or even moments of fun, between dancers on stage. Her response was that, while everyone is incredibly focused and highly professional, there were the odd moments when a word or two could be exchanged and that, in it, could be very supportive.

Yasmine was not only simultaneously preparing for Juliet and The Firebird but also for the celebratory evening for the Margot Fonteyn Gala and, after that, for Don Quixote and two Gala evenings in Japan. Everyone wished her well for those performances and the evening ended with warm thanks to Yasmine for all the insights she had so openly shared with her LBC audience.