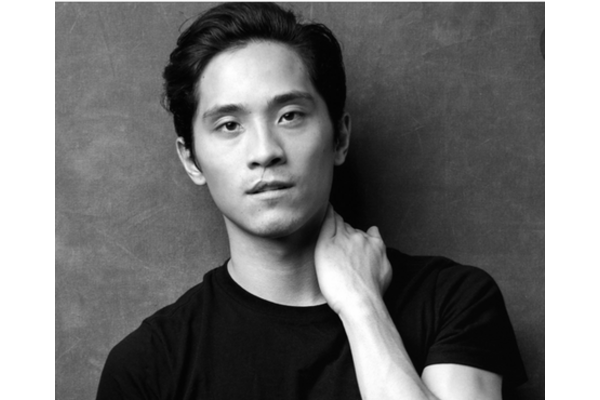 Jeffrey reflected on his diverse career and looked to his dancing, choreographic and entrepreneurial future with the dance writer, Graham Watts
10 Aug 2021

After a welcome from the Chair, dance writer Graham Watts shared what he was hoping to explore with Jeffrey, namely:

how and when he got into dance; his career in the US; his transition into ENB; lockdown; what lay ahead, including the première of Creature; and his interests outside ballet.

Born and raised in Philadelphia USA, as a child Jeffrey had first leaned towards sport (especially football and karate). However, his sister, Lia, was attending the Central Philadelphia Youth Ballet and the technique-driven approach captured his interest to the extent that, aged nine, he had pleaded, “Mum; please can I try?”

Jeffrey’s parents were of Filipino American heritage and had met while dancing socially. Graham commented that the many other dancing siblings came from a ballet background, so it was unusual that Jeffrey and Lia did not.

As Jeffrey was home-schooled, he initially enjoyed the social side of going to ballet classes. However, aged 13/14, he could feel that he was improving and, realising that he really wanted to dance, sought the approval of his family and teacher to take his training seriously. Around that time, Lia graduated into Boston Ballet, thus forging a connection with the Company which led to Jeffrey following in her footsteps in 2009

Miko Nissenen, who was (and is) the Artistic Director and Chief Executive of Boston Ballet gave Jeffrey early opportunities to grow as a dancer – for example, he danced Basilio in Rudolph Nureyev’s Don Quixote aged 20, for which he was coached in great detail and with much repetition by Maina Gielgud. Promotion to Principal three years later enabled Jeffrey to explore the Company’s extensive repertoire, which included new works imported from Europe as well as (for example) those of Balanchine and Nureyev. In addition, Jorma Elo, Boston’s Resident Choreographer, made a work on Jeffrey and Larissa Ponomarenko, which was both a “great honour but also somewhat nerve-wracking”.

Nevertheless, and despite often being the first cast lead, Jeffrey was wary of becoming complacent and felt the need to perform nearer to the edge of his comfort zone. So he took the initiative to put out feelers with a number of companies and Kevin McKenzie, the Artistic Director of American Ballet Theatre (ABT) was the first to respond. Jeffrey happily accepted his offer of a Soloist contract in the knowledge that it would represent an opportunity to grow as an artist and dancer within a very high-profile Company. Not many dancers joined at that level and, at first, Jeffrey felt a bit of an intruder. His rapid promotion to Principal brought with it both pride and a greater sense of responsibility because  he was representing his Filipino American culture.

Jeffrey added that it was impossible to overstate the privilege of being able to perform at the Metropolitan Opera House (the MET), with its vast, uniquely-shaped auditorium and the large and beautiful stage. ABT’s annual schedule  included five weeks’ residence at the MET with intense rehearsal and shows every day. Being in the theatre pretty much 24/7 was something he had cherished, not least for the camaraderie it engendered. Jeffrey’s ABT highlights included being Colas in La Fille Mal Gardée, covering for the first cast during the creative process of Symposium with Alex Ratmansky, and dancing Solor in La Bayadère (a role with which his time with ABT had ended).

Concurrently (in 2015), with his sister Lia, Jeffrey founded Cirio Collective with the aim of giving dancers the opportunity to choreograph and dance during the summer lay off. Previously, in Boston, he had been invited to make pieces, firstly for a ‘black box’ theatre and then for a main stage triple bill. Therefore, getting a group together to choreograph and rehearse with a view to seeking residencies and to appear at festivals seemed ‘the way to go’. Over the years, the project had performed at the Joyce Theatre Festival and at Isaac Hernandez’s Despertares Evening of Stars Gala in Mexico. It had also been possible to convene during the summer just past (the group’s 7th season of appearances) and Jeffrey had returned to the UK feeling good about what he had been able to create and inspired to continue on his own choreographic journey.

A direct approach from Tamara Rojo, the Artistic Director of English National Ballet (ENB), had led (after multiple conversations) to Jeffrey coming to the UK. Jeffrey was happy at ABT but he was equally keen to explore outside the USA. Attracted by a repertoire which was new to him and enticing roles, including Hilarion in Akram Khan’s Giselle, Jeffrey first became an ENB Guest Principal for five months in 2017. Then, after sampling the culture of London, which he loved, and with the additional appeal of having virtually twice as much stage time with ENB as he had with ABT, Jeffrey became an ENB Lead Principal from the 2018/19 season onwards.

After two incredibly busy years, with many roles new to him, activities ground to a halt as the Covid-19 pandemic took hold in March 2020, shortly before Akram Khan’s new ballet, Creature, was due on stage at Sadler’s Wells. ENB’s new headquarters had made working during the pandemic (with strict protocols) viable in a way that the previous HQ could not have done. Noting that ENB had ‘led the way’ in terms of digital output and that the five filmed pieces had recently been shown on stage, Graham enquired as to Jeffrey’s view of streamed performances. He had personally enjoyed the challenge of filming, which had been a completely new experience for him (“so many ‘takes’”) and he thought that digital dance was ‘here to stay’. However, he had welcomed the opportunity to translate Sidi Larbi Cherkaoui’s Laid in Earth into a live performance, not least because the audience reaction had been missing when they had filmed it nine months earlier. It had felt good to be back on stage in May and June, both at Sadler’s Wells and, with a gala-style programme, at The Royal Festival Hall, especially as that had made an upbeat end to a much interrupted season.

In fact, Jeffrey had been working on Creature  (creating the name role) over a period of two years, during which time there had been various versions of the work. He explained that Akram’s concept was a ‘post Frankenstein’ interpretation of the Woyzeck story in which the Creature tested humans to abandon the current world and go to another planet. “It is”, said Jeffrey, “a dark and moving work in which, even prior to the pandemic, Akram was envisaging disease, mask-wearing, isolation and a sense of abandonment”.

However, when the Company returned to the studio after the first lockdown, the first version proved to have been a skeleton. Akram had used the seclusion of ‘lockdown’ to contemplate further on what he wanted to say and how, therefore, he needed the original choreography to develop. For the dancers who had invested heavily in the work, it was difficult to let go of what had been rehearsed previously and Akram’s changes had involved a lot of re-learning, adjustment, and additional nuances - all the time, as individual artists and together, exploring further and delving deeper. Three  dates for the première had come and gone and, now that the dancers were back rehearsing after their summer break, it felt almost as if they were on the third iteration.  However, the dancers’ emotions were so real that Jeffrey predicted members of the audience would be able to identify with the piece and even see themselves within in.

Reminding the audience that Akram Khan’s choreography was a ground-breaking fusion of his Kathak heritage with ballet, Jeffrey and Graham agreed that his Giselle had been 70% ballet/30% Kathak whereas, in Creature, the proportions were more than reversed (at 20%/80%). Jeffrey added that Akram wanted to see the ENB dancers “let go, take on that vocabulary, and make it their own”.

In addition to working intensively ahead of the première of Creature in September, Jeffrey also had two lead roles in the new production of Raymonda. He explained that Tamara Rojo, whose first venture into production and choreography this was, was re-writing the story and taking a different approach to the key character. While the choreography, based on the Petipa 1898 original, was primarily classical, Tamara was also seeking to ensure that the ‘national dance’ elements were performed authentically. Jeffrey thought that the solos and pas de deux, which had been set during 2020 and the early part of 2021, were very technically challenging.

Despite his busy schedule, Jeffrey found time to pursue wide-ranging personal interests. He admitted to being a ‘foodie’, enjoying cooking and dining out. He was also developing an interest in wine and liked to cycle. And, yes, he had been able to get back to the USA to see his family despite the travel restrictions and the need to quarantine on return to the UK.

The evening concluded with observations about the ‘clever’ nature of ENB’s repertoire choices, encapsulated in what Jeffrey had shared about the new, upcoming productions, and great appreciation of what had been an illuminating conversation.