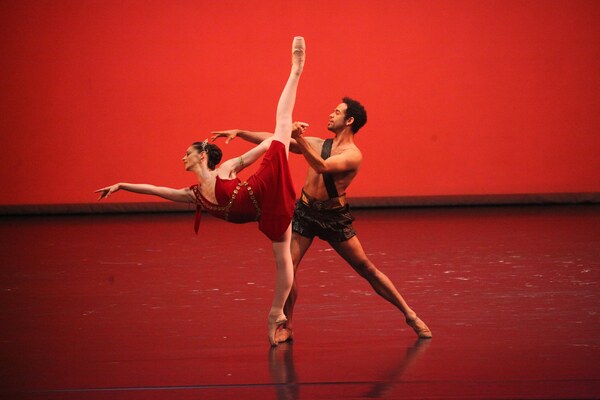 Laurretta came to talk to the LBC in 2016, while she was a Principal with English National Ballet working alongside Yonah Acosta, her now husband, who was also an ENB Principal.

In 2017, they both took the bold step of moving to Munich where they have been dancing the leading roles in a very wide-ranging repertoire, including works in which they have starred together. They also make frequent appearances as guests in performances and galas all over the world. It will be really interesting to hear about the many aspects of their truly international dancing lives as individuals and as partners.

Laurretta  Summerscales was born in Surrey and trained locally until she attended English National Ballet School for 2 years. She joined ENB in 2009, was cast as Myrtha at the Coliseum within 6 months, and was promoted to Principal on stage, on her birthday, in January 2016. She not only danced many leading roles in the ENB’s classical repertoire at that time (including Giselle, Odette/Odile, Medora (Le Corsaire), Lilac Fairy, Clara/Sugar Plum Fairy, Juliet and Swanhilda) to considerable acclaim but also danced principal roles in The Firebird (Williamson), In the Middle Somewhat Elevated, M-Dao and Petite Mort. A laureate of many competitions, including winning the Gold at the Beijing International Ballet Competition in 2013, Laurretta was twice The People’s Choice in ENB’s Emerging Dancer Competition.

Since joining Bayerisches Staatsballett, she has added a phenomenal number of new roles to her repertoire including Nikiya in La Bayadere, Kitri in Don Quixote, the title roles in Raymonda, Alice and Esmeralda, Lise in La Fille Mal Gardee, Katharina in the Taming of The Shrew, Balanchine’s Rubies, and works by John Neumeier. Laurretta’s ENB speciality of taking both leading roles in various ballets (on different nights!) has continued in Munich where she has portrayed both Tatiana and Olga in Onegin, Phrygia and Aegina in Spartacus and Anna and Kitty in Anna Karenina. This season, she created a role in Wayne MacGregor’s Sunyata. Just before going to Munich, Laurretta  toured with Shanghai Ballet in The Netherlands, dancing Odette/Odile in Derek Deane’s Swan Lake with Vadim Muntagirov as her Prince. More recently, she has performed Carmen with AcostaDanza and has guested in galas all over the world.
Yonah Acosta was born in Cuba and started dancing when he was 10. Following his training at the National Ballet School, he first joined Ballet Nacional de Cuba and then transferred to English National Ballet in 2011. In 2012, he won both the Emerging Dancer Competition and the People’s Choice Award. Quickly rising through the ranks to Principal, Yonah played all ENB’s leading men, often (although not simultaneously) taking two roles (or more) in a particular ballet including Romeo/Mercutio, Nephew/Prince, Bluebird/Prince and Conrad/Birbanto/Ali in Le Corsaire as well as Albrecht in Giselle. He performed in Wayne Eagling’s Men Y Men and made a special impact as the Young Man in Roland Petit’s Le Jeune Homme et la Mort which he has subsequently reprised opposite Alessandra Ferri.

On joining Bayerisches Staatsballet, he quickly found himself stepping in for an injured dancer as Petruchio in John Cranko’s The Taming of the Shrew and has since made this role very much his own alongside his real life wife. Yonah’s repertoire over the last two years has included Spartacus, Basilio in Don Quixote, Colas in La Fille Mal Gardee, The White Rabbit in Wheeldon’s Alice in Wonderland, Balanchine’s Rubies and leading roles in works by John Neumeier. Having danced Jean de Brienne in Nureyev’s Raymonda Act III with ENB, he has recently transformed himself into the meaty role of Abderakhman in Ray Barra’s Raymonda. Yonah has not only guested overseas with Laurretta (as Escamillo in Carmen with AcostaDanza in Cuba, in Kazan and in galas) but has partnered Alina Cojocaru in Hamburg and Elisa Badenes in Stuttgart. He has appeared with the Paris Opera and Houston Ballets.