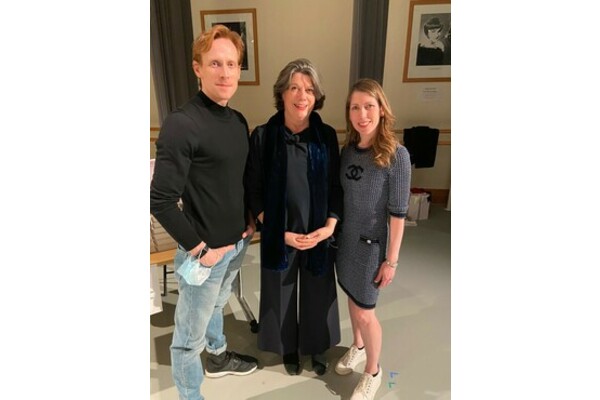 THE LBC'S "IN CONVERSATION" EVENINGS ARE BACK 'IN PERSON'

It was time for a triple celebration for LBC Members on the 2nd November 2021. At the first ‘in person’ event since early March 2020, the audience of over 100 heard from Leanne Benjamin, former SWRB, BRB, Berlin and RB Principal on the very day her autobiography was published and from Edward (Ed) Watson, only three days after his retirement as an RB Principal after 27 years with the Company was honoured on stage.

The dance writer Sarah Crompton had both written a preface to a photographic tribute to Ed’s artistry by Rick Guest and worked with Leanne on her book. She was therefore able to ensure that the conversation covered a wide range of topics including feelings on retirement; the essence of a strong partnership such as that which Leanne and Ed had enjoyed, managing injuries, tailoring workloads as careers progressed, creating works with choreographers of contrasting styles and, now, as coaches, handing down their accumulated knowledge and expertise to the next generation of dancers.

Following the illuminating discussion, during which Leanne and Ed frequently talked to and prompted one another, the audience had the opportunity to buy copies of Leanne’s book and have them signed by the author. There was a long queue!

A FULL REPORT OF THE EVENING WILL BE POSTED ON THE WEBSITE AS SOON AS POSSIBLE.

IN ADDITION, LEANNE ARRANGED FOR THE CONVERSATION TO BE FILMED AND IT IS HOPED THAT THIS WILL BE MADE GENERALLY AVAILABLE.