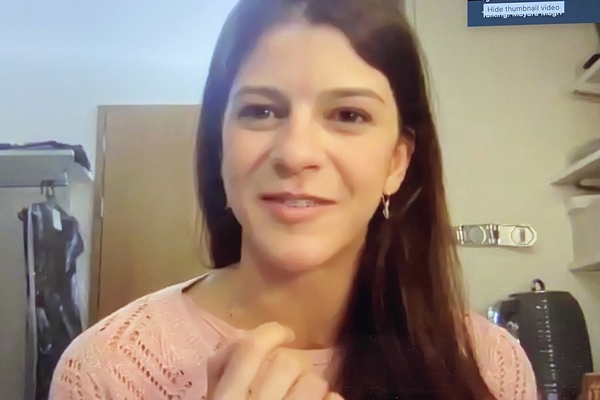 Joining the LBC via Zoom from the Royal Opera House, Mayara Magri spoke animatedly with Deborah Weiss, dance writer and critic, about her up-bringing, education and stellar career in the LBC’s latest “in conversation” event.

Deborah started the conversation at the very beginning, asking Mayara about her childhood in Brazil. Mayara started dancing aged 8. She recalled that her parents thought “ballet was too expensive” but was fortunate since the local dance school gave scholarships to “young people with potential.” Here she learnt ballet, contemporary, jazz, theory and so on, providing her with a really strong foundation to build her future career on.

Mayara recounted how she has been performing from a young age, and how this has made her comfortable on stage – “I am not really scared about making mistakes.” Aged 16, having exhausted the limited domestic competitions in Brazil, Mayara’s teacher encouraged her to set her sights abroad. She went on to win at the Prix de Lausanne (dancing the Coppelia solo) and at the Youth America Grand Prix (dancing the black swan solo).

After her success at these competitions, Mayara decided she wanted to join the Royal Ballet. She first spent a year at the Royal Ballet School, which she said was slightly daunting (“the language was quite a barrier”) but an opportunity that could not be missed. Mayara spoke extensively about her 10 years at the company, describing the transition from first soloist to principal (a position Mayara was promoted to last year), how she prepares for different roles, and building rapport with different partners.

Mayara also recently appeared in the Royal Ballet’s new work Like Water for Chocolate, creating the character of Rosaura. She described Rousara as a complex role and said it was “strange not to have a video to watch or research, but this was also good in a way – you can imagine how you want the role and transport it to the stage with no preconceptions.”

Once Deborah had concluded her questions, LBC members and guest watching at home provided their own, asking Mayara, among other things, about her favourite roles, summer plans and the teacher training course she has been taking at the Royal Ballet School.