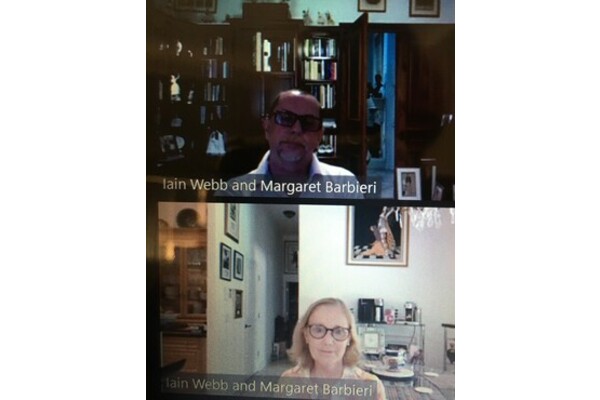 The Director and Assistant Director of Sarasota Ballet zoomed from Florida with the dance writer Gerald Dowler.
20 Jul 2021

[LBC members were joined on the night by a number of supporters from the USA.]

Noting that Iain and Margaret were in their fifteenth year of being in charge in Sarasota, Gerald enquired how they had come to be there. Iain explained that, while dancing with The Royal Ballet, he had not imagined himself as a Director.  But he had been enjoying organising festivals and working with groups of dancers and, when the job in Sarasota was advertised, he felt he should, at least, ‘go for it’. It was clear that the city had a strong cultural tradition with a renowned Opera Company, that the Board’s ambition was to achieve similar, international recognition for its ballet and that they were looking for the next Director to make a long-term commitment.

Iain talked about his repertoire choices – an early one, Infernal Galop, made Sarasota the first ballet company in the world to dance a Matthew Bourne piece. Although the Company’s name in the UK had been burnished by its association with the works of Sir Frederick Ashton, which had helped to forge its style. Iain emphasised that he had always sought to mount an eclectic programme with Balanchine, Twyla Tharp, Hans Van Manen, Christopher Wheeldon and David Bintley among the choreographers being featured. He attached great importance also to enabling the dancers to have work choreographed on them.

Although Margaret staged many of the ballets, including those in which she had danced herself with Sadlers Wells Royal Ballet, Iain sought to respect the history and, wherever possible, to bring in stagers who had worked directly with the choreographers and, thus, to stay as true as possible to the original.

Building an audience had also been high on their Directors’ agenda as the Company was not state-sponsored. Many supporters came from further afield (including the Snowbirds who decamped to Florida from New York State and elsewhere in the north of the USA in the winter).

Questions from the Zoom audience included ones related to the Covid-19 pandemic and Iain and Margaret shared how they had worked in ‘pods’ and had tried to ensure that every dancer had the opportunity to perform for digital streaming – a development which had resulted in a steep learning curve, especially for Margaret.

The good news was that a Sarasota tour to London was a real possibility and, after such an interesting  and stimulating evening, the UK attendees were left looking forward to that even more.